Hot Topic – IOS vs Android CPI & Quality of Customer…and why?

When it comes to mobile app marketing, it is important to have a strategy in place from the offset where what return on advertising spend (ROAS) really means to them is fully understood. This will be specific to the client’s business model and ultimately depend on how the app generates revenue.

Does the customer have to pay to install the app? Or do they pay to go Ad-free within the App? Maybe your client only makes money when a loyal customer pays for a subscription.

It is not a true indication to track a cost per install (CPI) as the only metric and defining factor in ROAS. This vanity metric is comparable to judging clicks as the only metric for a successful campaign. Other metrics which you should consider, depending on the app in question, alongside CPI are:

Apple’s Search Ads offer advertisers the lowest CPI rate. If a client wanted to focus solely on installs, no matter the quality or the interaction post download then it would be far cheaper to advertise to Android users only. An iOS install typically costs 3 times that of an android install in the same country.

“Android has managed to conquer a much bigger mobile devices market share and hence there is less competition for mobile users on the Android side.”

But why pay more?

The consensus is that app downloads from an iOS user are generally of a better quality and therefore more lucrative for the advertiser. The data suggests that if the app is free, iOS users are more like to purchase post-install. They are less likely to delete the app and therefore, the higher CPI is arguably justified. Whereas, Android users are classified as non-committal and less likely to become a lifetime customer. 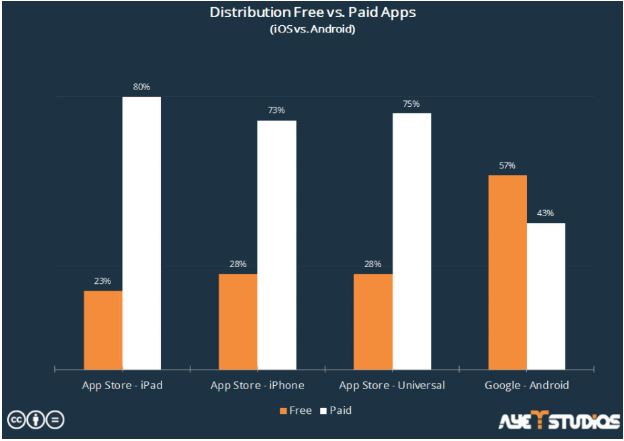 There are demographical differences between Android and iOS users, and the two are built differently which has led to the disparity in costs.

According to developers Buildfire. …if you’re going to charge for downloads, the Apple App Store is the place to do it. That’s because those users are used to seeing more paid apps and less free apps when they’re searching for something to download. Whereas Android users don’t see as many apps that require payment to download.

It is down to the advertiser and the marketer what their goals are and what the are prepared to pay for a cost per good install.

To learn more about KMG Apple Search Ads, please get in touch today.